UJIN LEE
site-specific projects > Roll the ball, 2011
Roll the Ball was a public art project by Ujin Lee at Hudson River Park’s 14th Street Park in New York City on October 16, 2011. The project was a site-specific public work for High Line Open Studios Chelsea 2011. Lee carried out a performance by appearing with a three-foot-tall ball made by winding more than 2000 traditional Korean wrapping cloths, or bojagi, of the artist’s own design; each measuring 33x33 inches and folded and tied end to end. Lee rolled the ball to unwind the rope of tied cloths and lay it flat on the ground. She then rolled the rope back into a large ball. After the two-hour performance, the ball was completed; Lee exited the site and the ball remained on display for an hour of installation viewing. The public was then invited to again roll and unravel the ball and untie the individual cloths to take home.

This public project was made possible in part by High Line Open Studios Chelsea 2011 and Hudson River Trust. Major support and funding were provided by AT&T. 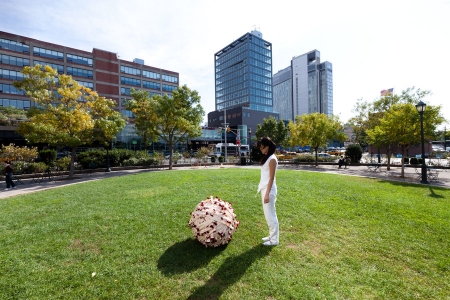