This project featured a performance and an installation involving viewer participation of the general public. Lee carried out a performance by entering the park through the Arch, carrying one end of a long train of traditional Korean wrapping cloths, folded and tied end-to-end. She then placed the end in the center of the Arch Plaza, exited through the Arch and re-entered with another train of cloths to attach to the first, repeating this until she had tied together 33 trains, a total of 3337 wrapping cloths. While she tied on more cloths, she slowly coiled the growing train into a tight but ever-widening spiral. When the entire length was coiled, Lee laid down the end of the final train and exited back through the Arch, disappearing from whence she entered. The performance and installation viewing ran from noon through 3 p.m., after which the public was invited to uncoil the installation, untie the knots, and take home the individual cloths.

This public project was made possible in part by the New York City Department of Parks & Recreation. Major support was provided by Seoul Foundation for Arts and Culture, with funding by Taejung Industrial Co., LTD. 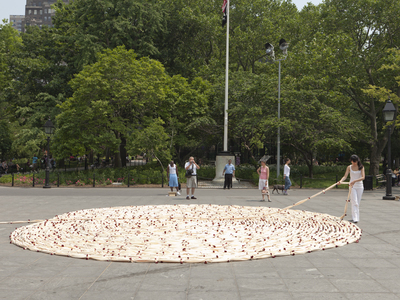 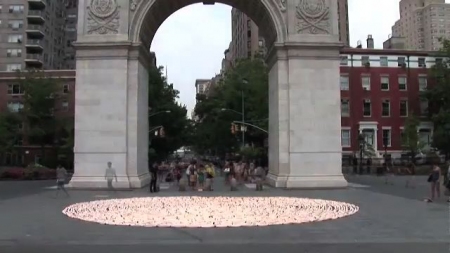